Crickets. The closest thing to a perfect protein source this planet has ever seen. 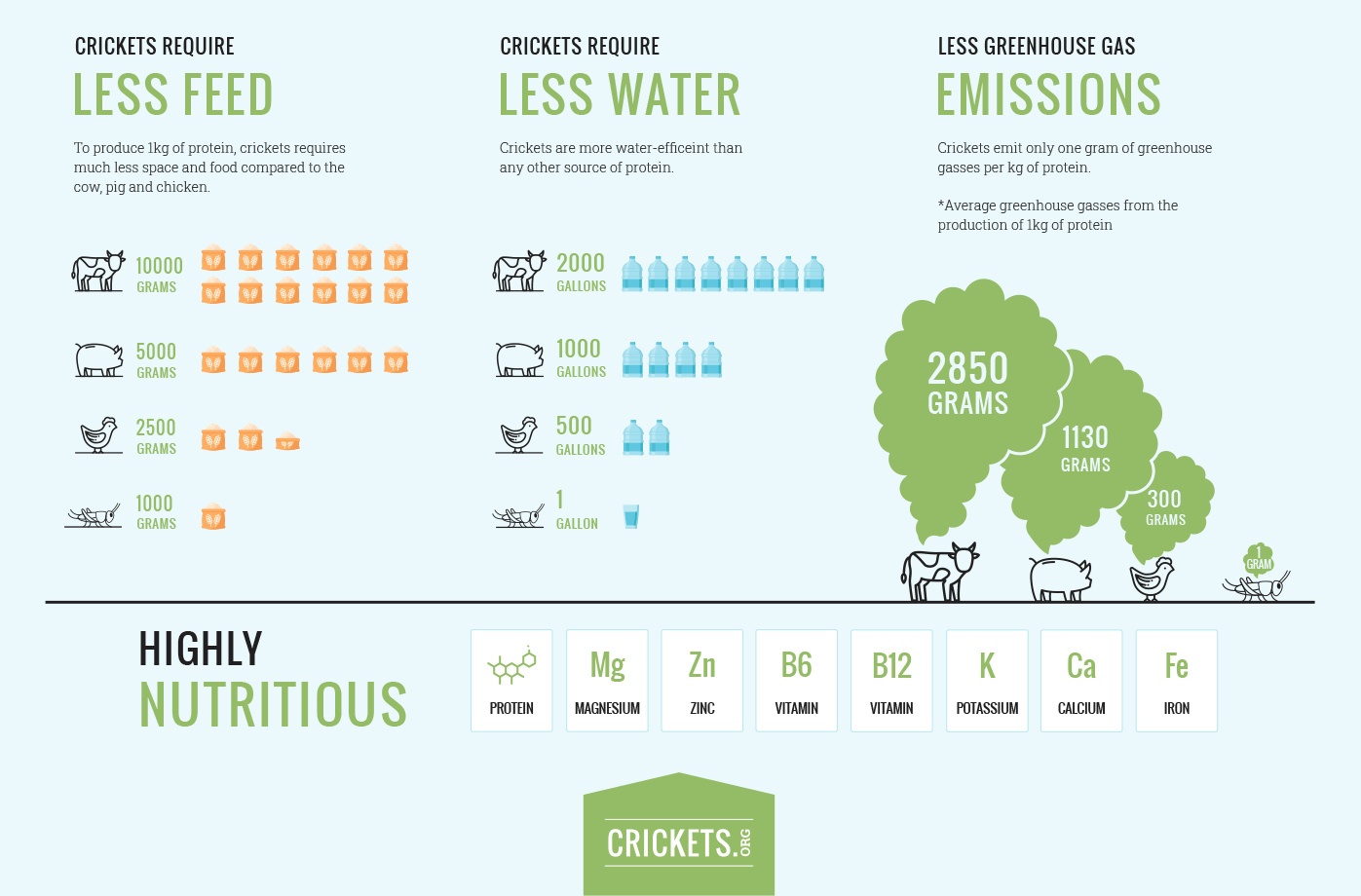 This article would be titled “Why Lobsters?” if it was written 120 years ago when lobsters were looked at with the same derision as crickets are today. Crustaceans like crabs and lobsters are basically giant ocean insects no matter how you look at it. Why is it that we’re so okay with eating a giant ocean insect but not a smaller land insect? It’s because you’re used to it. The only barrier separating a lobster and a cricket is the barrier in your head. 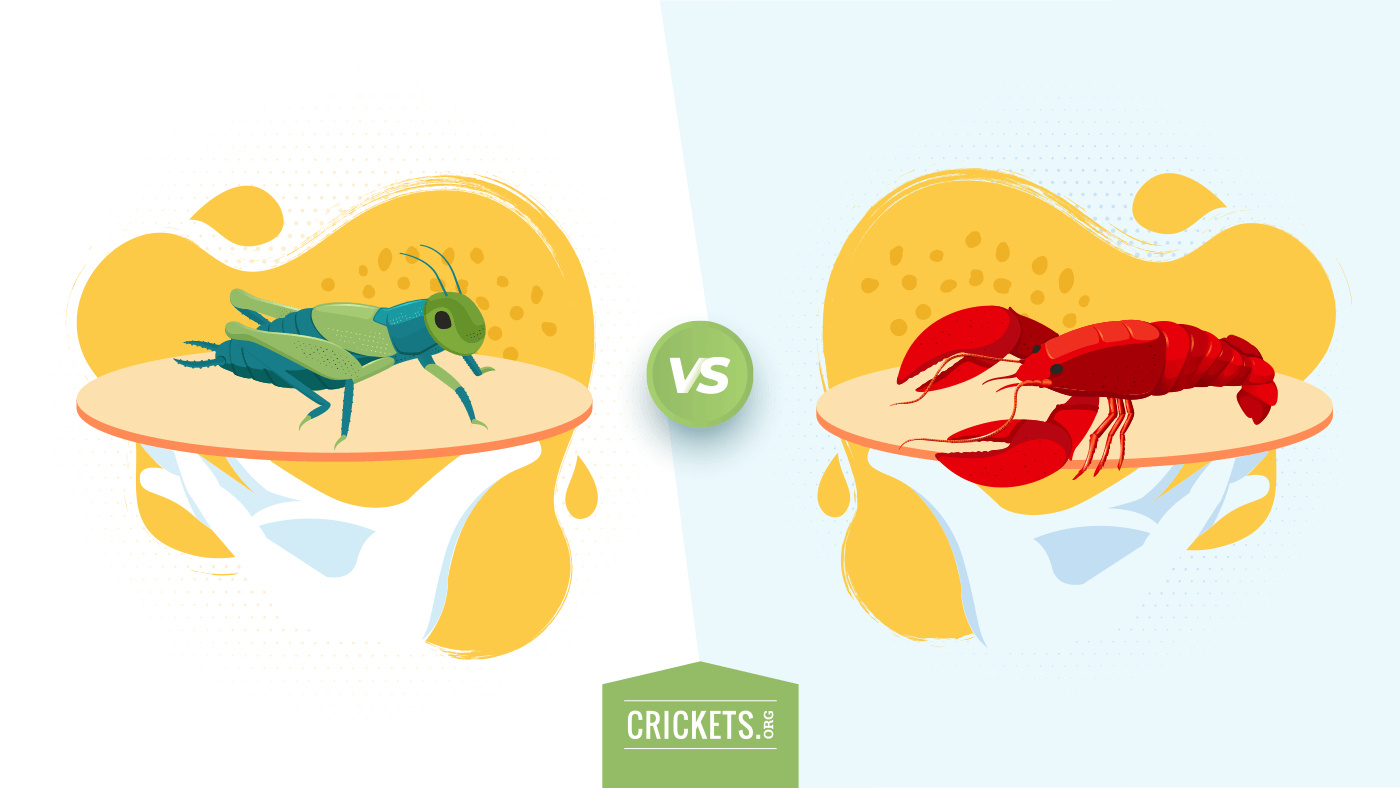 We often think of “meat” as just chicken, pork, beef, or seafood. We’ve held this belief ever since we ran out of buffalo. Maybe it’s time to reexamine where we get our protein sources and how we think about them. It’s weird that in our cute animal loving society, we’ll happily eat a cute cow but become disgusted at the thought of eating an insect like a cricket. Shouldn’t it be the other way around?

Leaving out an entire edible phylum of the animal kingdom from our plate causes us to miss out on health benefits and create an enormous devastating environmental impact that could be avoided. Now, let’s take a deep dive into why you should add crickets to your diet.

Unfortunately, very few people know that our livestock industry is incredibly harmful to our planet.[1]

It's bleak, but we need to face the facts, the world is running out of resources. Current livestock consumption is unsustainable. We have to start introducing other types of high-protein livestock that require less resources and Crickets fit the bill perfectly. 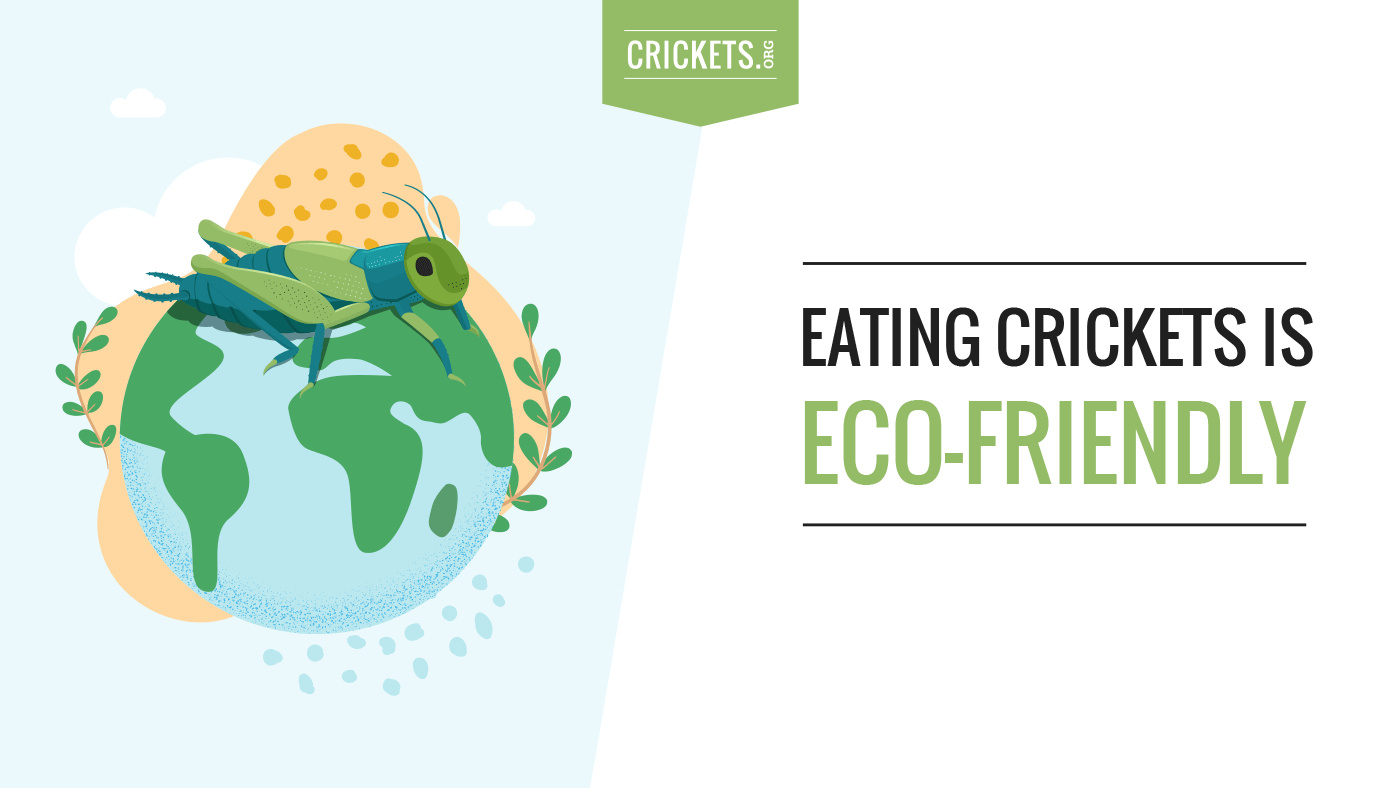 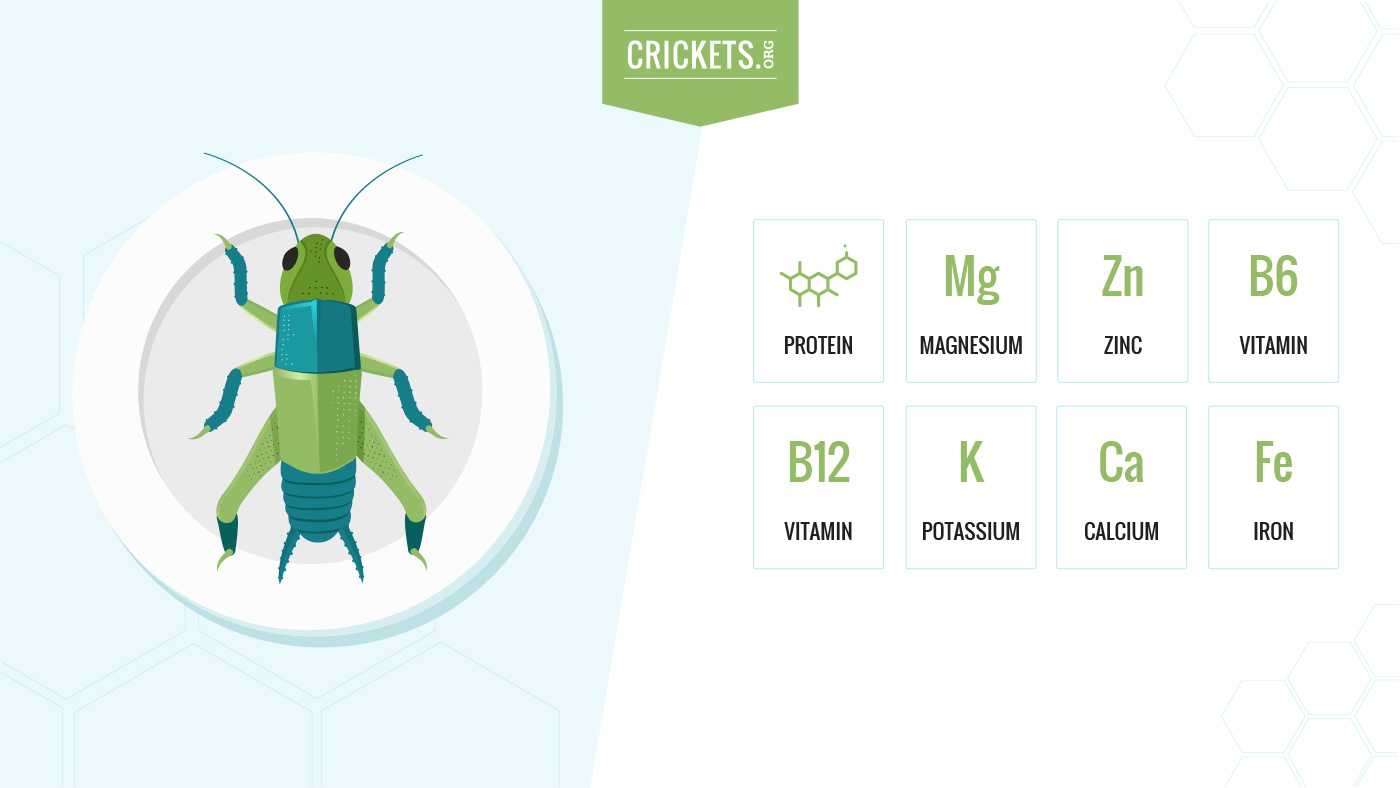 Though specific amounts of nutrients provided by cricket meat vary by species, all provide the same basic vitamins, protein, and minerals you need to stay healthy.[4] Cricket meat is high in the following:

As well as essential amino acids including:

These amino acids[5] build proteins, synthesize hormones, and keep skin looking healthy! They are crucial to brain health and keeps our brains performing at a rapid-fire pace.

Most of the world is already doing it.

Though the western world is largely averse to eating insects, over 80% of countries around the world have incorporated insects into their daily diet. Many countries have been doing this for hundreds of years! Mindset is the only thing that makes eating insects a big deal. 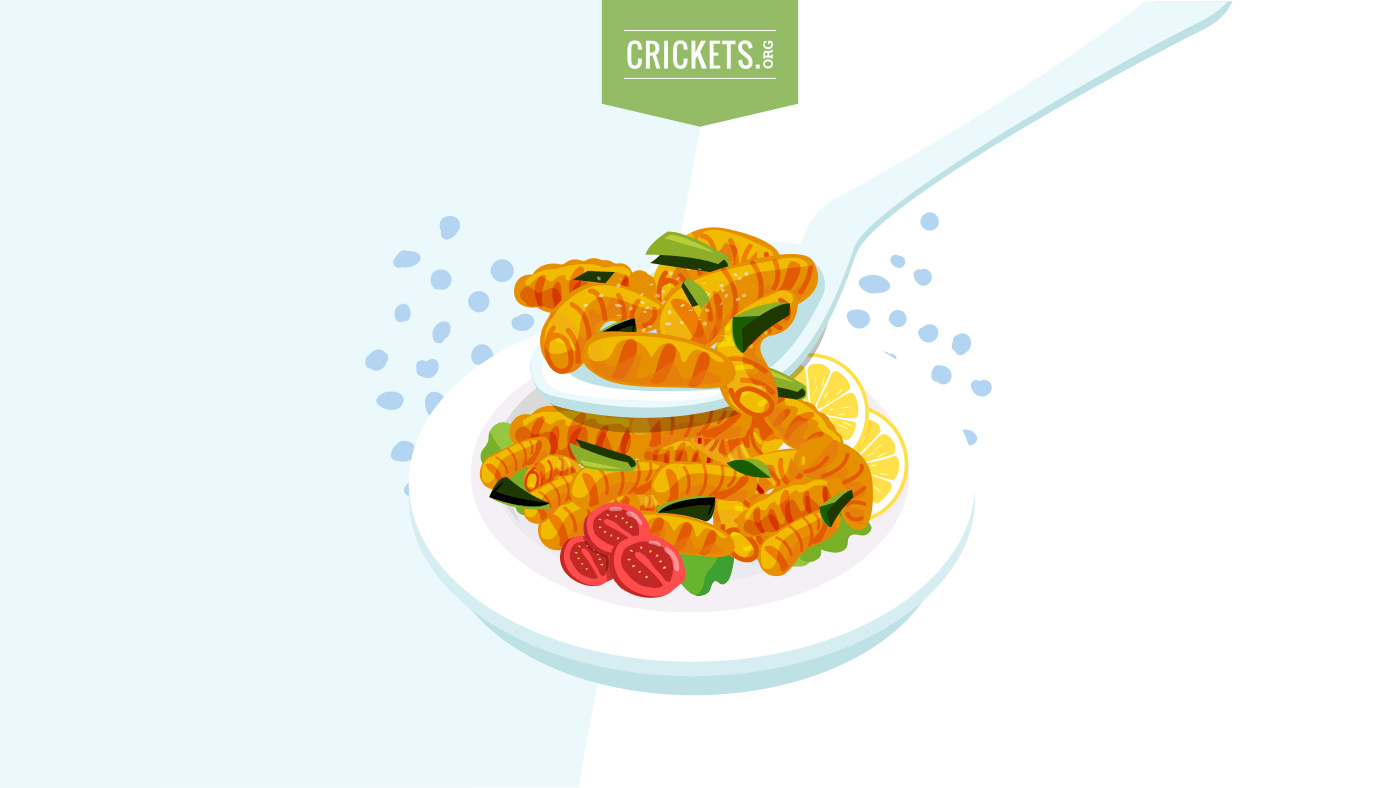 Markets in Thailand sell over 160 species of insects as food[6] and crickets are a popular choice along with beetles, ants, and locusts. There is an entire phylum of flavor and nutrients we in the west are missing out on!

Countries in Africa (Zambia, Nigeria, and Zimbabwe) commonly make insects part of their school lunch menu and sell them in their open markets. Insects makeup half of their overall dietary protein source and are valued above other meat products.

Some countries even regard insects as delicacies! Mexico, Laos, and Cambodia serve ant eggs as a gourmet dish.

Americans’ general reluctance to eat crickets and other insects stems from fear, ignorance, and social conditioning. We’ve been conditioned to feel disgusted or afraid. Media always has insects paired with dirty environments, and things that elicit a danger/disgust response from you. Besides Disney’s Lion King, nearly everything to do with insects in our media has been to show how painful or poisonous bites are, how they spread diseases, or are paired with sound effects to make them seem alien. I think it’s fair to say insects have an undeserved bad rap in our corner of the world. 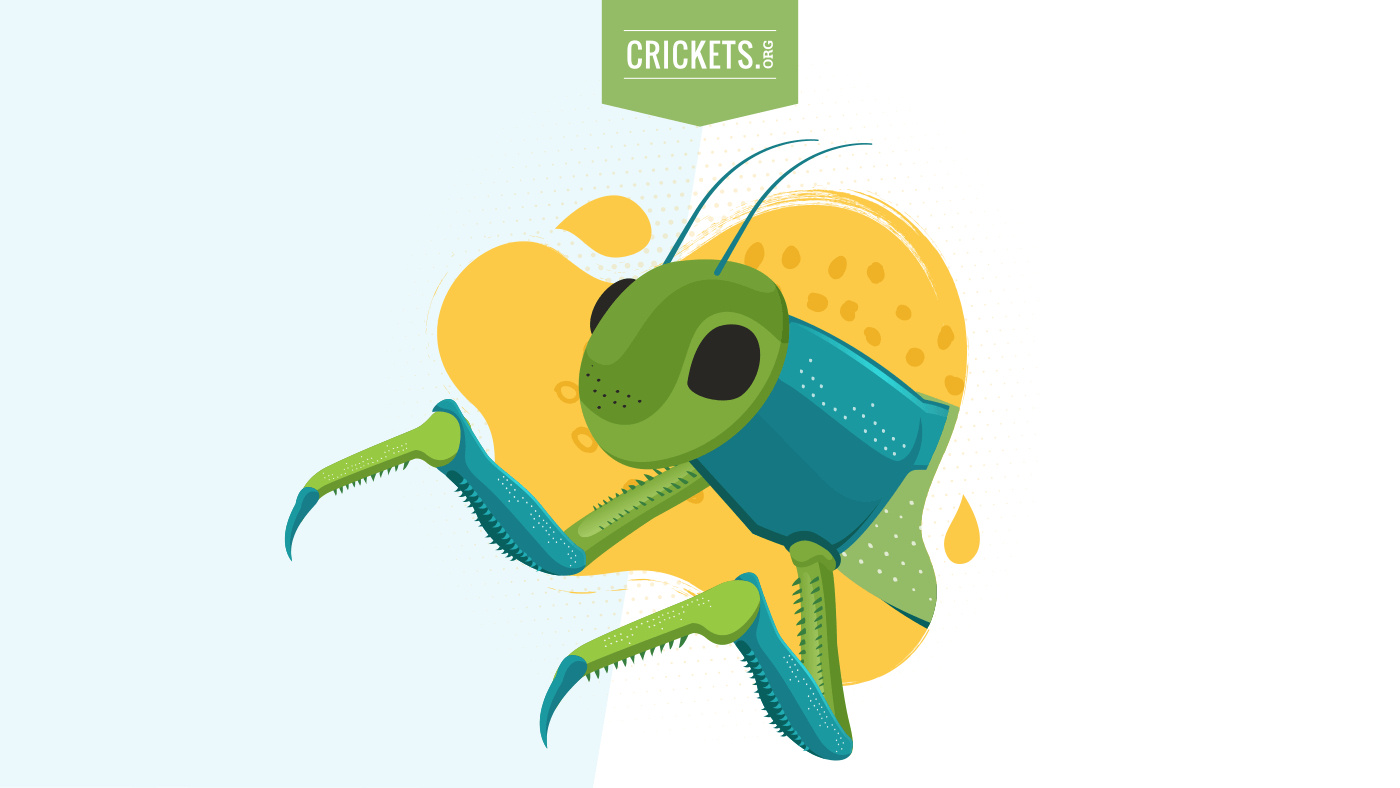 Many aversions to insects come from their strange appearance. If they have many legs, we don’t consider putting them anywhere near our mouths. It seems unnatural when most of our food walks on fours. This is an irrational fear that we as a society have given ourselves. That said, the general world population is not revolted by lobster and shrimp, which are also arthropods. It all comes down to changing our way of thinking. Unlearning what we have been taught opens up a whole new world of cuisine!

This may come as a shock but we already eat insects regularly. The process of manufacturing most food that we eat isn’t perfect. According to the FDA[7], it is economically impractical to produce food without “defects”. This means that bugs slip through the cracks in the process and end up in several products we consume. 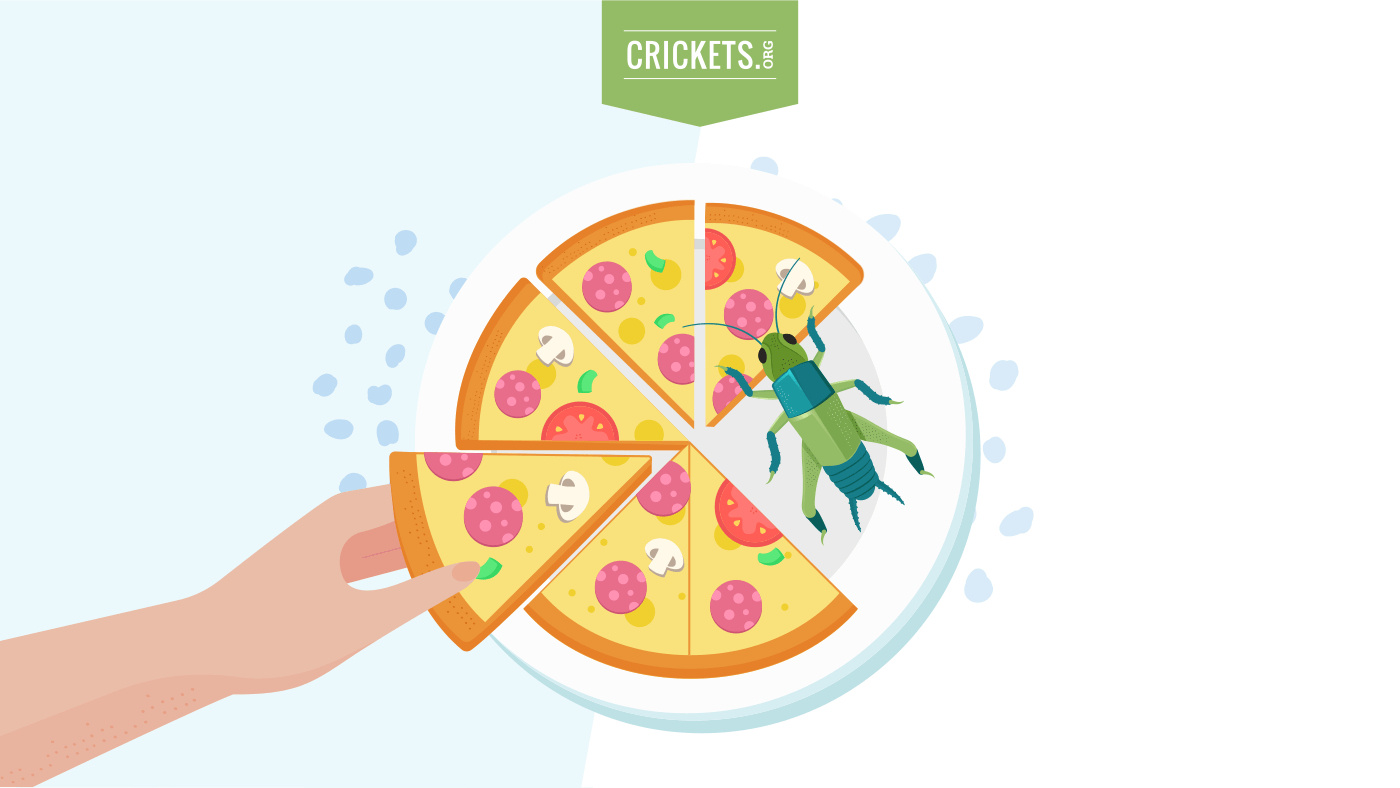 These are just a few examples of foods that you may eat every day that contain insects or insect parts. They are often invisible because they’re ground up but just because you can’t see them doesn’t mean they aren’t there.

Aside from food, makeup products intentionally use insect parts, particularly carmine. Carmine sounds perfectly normal as far as other pigments and chemicals go but it is actually made up of the ground-up bodies of cochineal beetles.

These cochineal beetles are found in most makeup that uses red pigment. Popular brands that use carmine as an ingredient in their cosmetics include:

Carmine is also used to make red foods visually appealing. Why? Because it isn’t harmful to you! Consuming this animal byproduct is safe unless you are allergic to specific proteins found in the dye.

One reason that we are repulsed by the thought of eating insects is that we have no idea we’re already consuming them. Pizza is a well-loved food that you eat all the time and as you now know, you are likely eating it with a side of flies.

Crickets are yummy and versatile.

You may be concerned about how cricket meat tastes and how you would serve them without enduring the ick factor of eating something that stares at you and has six legs. This is understandable if you haven’t eaten them before

If you want the nutritional benefits that crickets provide without having to cook them whole, cricket flour is a great option for you. 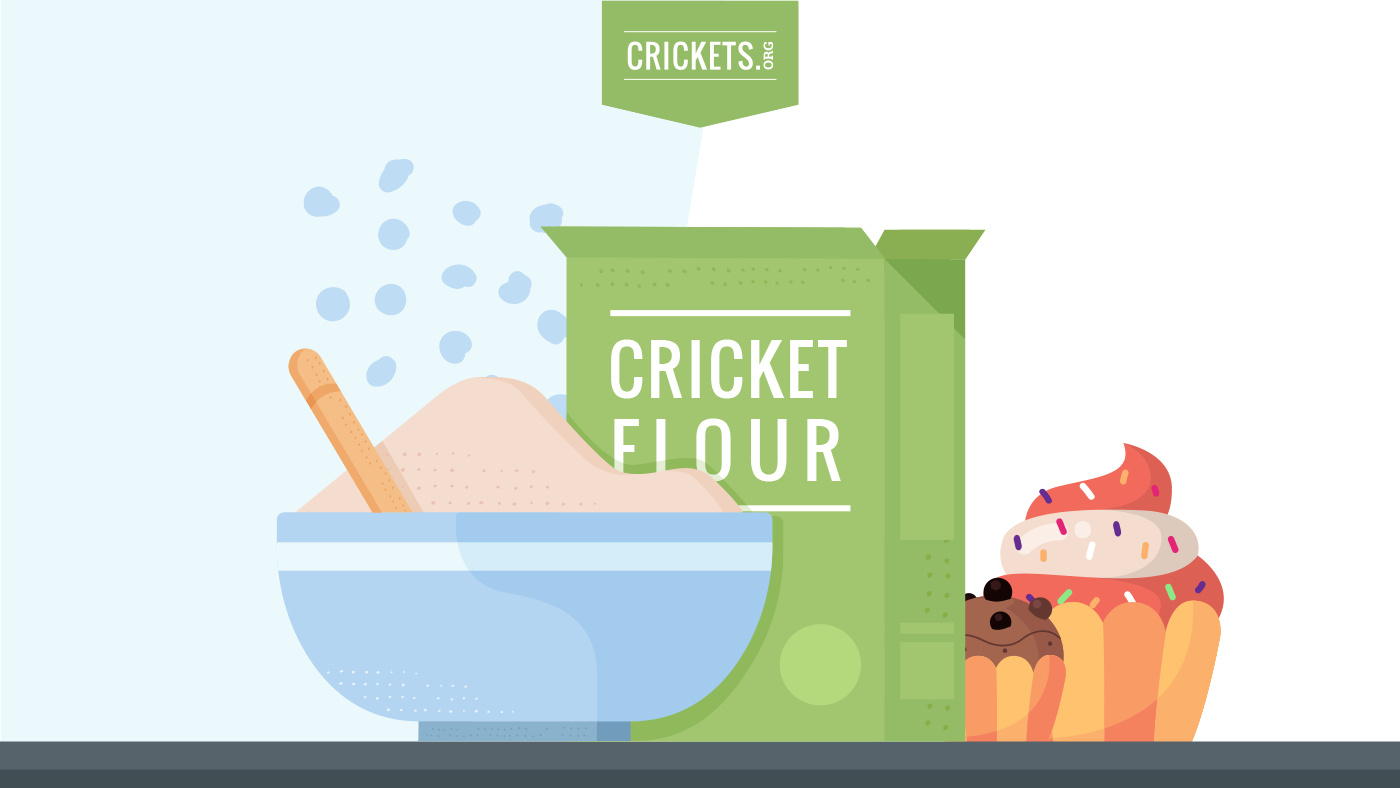 Cricket flour has a very mild flavor that many people describe as nutty. It can be incorporated into many recipes that you already make at home. Dishes that can be made with cricket flour include:

Sauteeing brings out the best flavor in crickets just as it does with most vegetables and meats. It’s simple and the outcome is divine! The only ingredients you need are:

The end result is golden, crispy crickets that taste nutty and according to some, similar to shrimp. You can eat them alone or add them to tacos, pasta, salsa – anything that complements the flavor. The possibilities are limitless.

If you’re less squeamish about eating crickets whole, you can bake them for a healthy and flavorful snack. Make them sweet or savory, depending on the spices that you add. People usually opt for garlic and herbs but those with a sweet tooth might prefer tossing the crickets in cinnamon and sugar.

If there is one thing that people love above all other cooking methods, it’s frying. Frying food just seems to make everything taste better - including crickets.

Fried crickets are one of the most popular snacks in Southeast Asian countries such as Thailand. They can be flavored in several different ways. If you like spicy or salty food, fried crickets are the perfect snack option for you.[13]

Though crickets aren’t popular enough to absolutely prove this claim, crickets could be a large part of the solution to food shortages around the world. 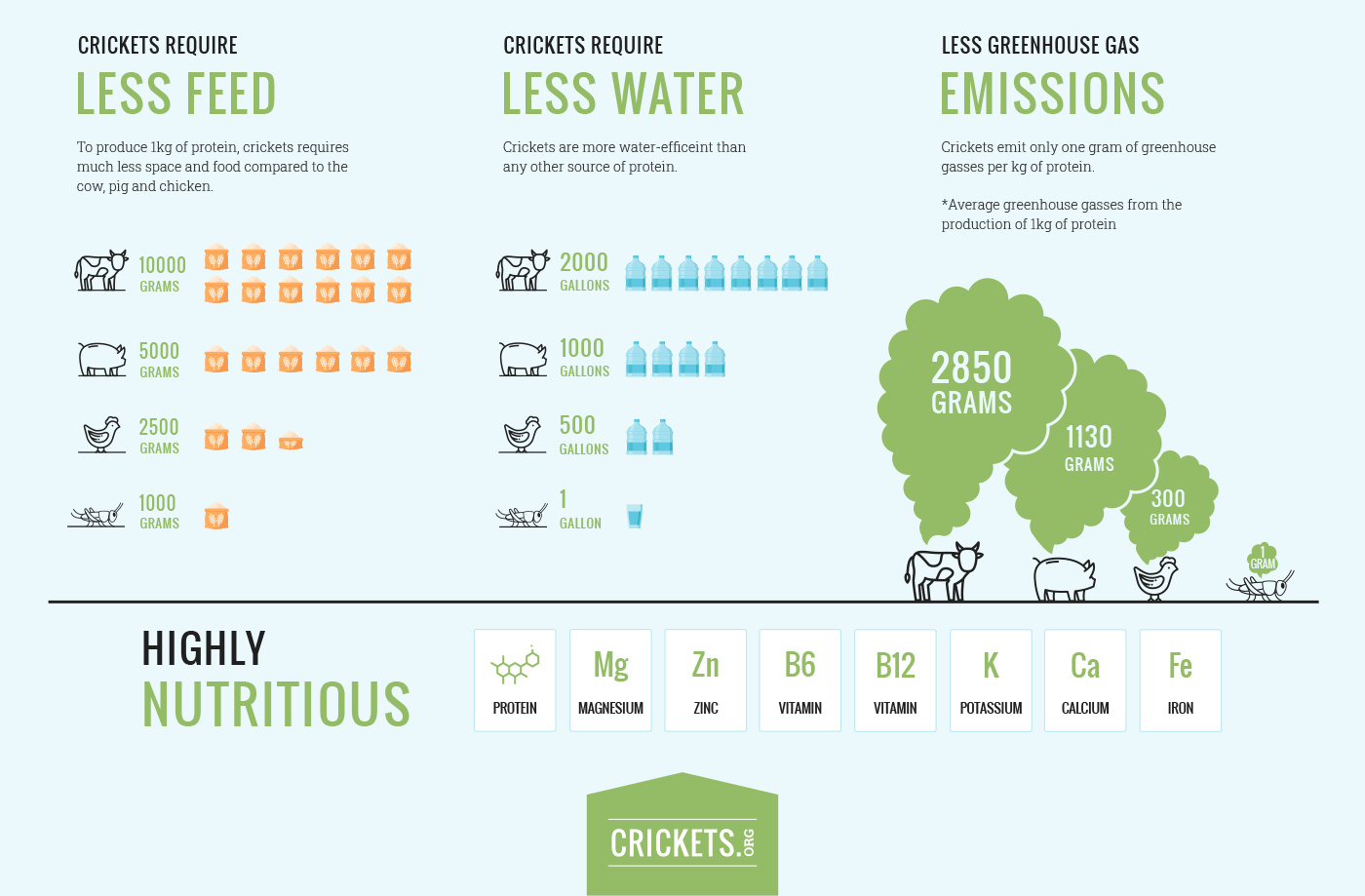 Recent livestock diseases spreading rapidly in Asian countries has severely impacted the supply of consumable animal products while demand steadily rises. Food shortages are being felt all around the world due to the effects of natural disasters, climate change, and pollution. People need the nourishment that livestock provides and crickets can provide said nourishment.

Because crickets multiply so quickly, investing in more cricket farms could substantially cut world hunger. Food insecurity could become a non-issue in many regions because crickets provide a steady supply of nutrients that our bodies need to survive.

The criticisms of this claim are rooted in the idea that trading one food industry for another will cause the same issues that the livestock industry is facing now. That said, the solution to food insecurity and world hunger is to diversify food sources and cricket farming does that in conjunction with other sustainable food sources.

So, why choose crickets as a new food source? To sum it all up:

Our planet can be saved if we get over our illogical notions about eating insects and start serving them up. Most of the world’s population consumes mammals every single day and it’s causing a whole host of problems. If we diversify and branch out, a whole new delicious world of cuisine opens up and we make the planet livable for everyone for centuries to come.

Give crickets a chance, for your health and the Earth’s. 🦗

2. Enter your email to get updates to Crickets.org...

Thanks for signing up!

Tell your friends what you learned about crickets...